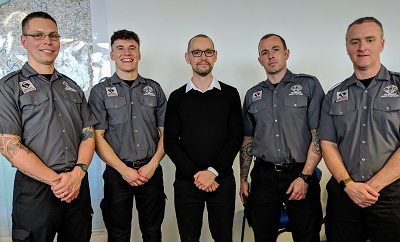 (L-R) Richard has been working as a Tri Service Safety Officer in Liskeard for 2 years. Jack, Myghal and Phil will be deployed in Lostwithiel, Polruan and Looe

Last month, the Conservative Police and Crime Commissioner announced she would be charging the 30,000 households in South East Cornwall an average of £12 extra on top of their council tax. But, due to a black hole in the Police pension fund, there will be just one extra PC on the beat in the entire Liskeard sector which stretches from Torpoint to Bodmin Moor! Meanwhile we are likely to lose two more PCSOs, on top of the dozens of PCs and PCSOs who have already lost their jobs due to government cuts in the past few years.

Cornwall Council is jointly funding a team of Tri-Service Safety Officers who are qualified to respond to Police, Fire and Ambulance emergencies. As well as providing quicker response times, these multi-skilled officers will use their time between calls to carry out preventative work. This approach, which exemplifies the Lib Dem philosophy of providing maximum flexibility for front-line workers, has never been tried outside Cornwall.  I am delighted to say that our area will get four of the ten officers so, despite more Conservative cuts, the Lib Dem team is working hard to keep South East Cornwall safe.