Government moves school goalposts, but nobody has noticed!

Four days after telling schools to prepare for the return of Reception, Y1 and Y6 students, it changed the policy to prioritise a different set of children, but nobody has noticed!

On Thursday 14th May, just days after headteachers had contacted parents to tell them of the plans for Reception, Y1 and Y6, the Government changed policy, declaring that before any of these year groups are brought back into school, the priority should be for children of all critical workers in all year groups to return, even if they have no problems with childcare.

The Government's new advice, published on May 14th: 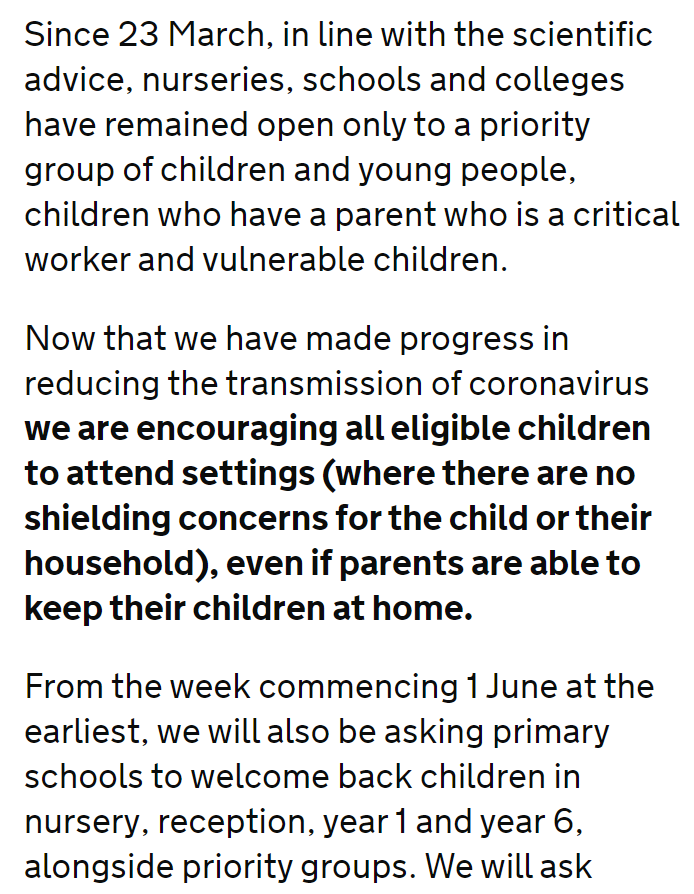 But by the time this policy was quietly added to the Government website, schools were already fully occupied with making plans based on the first announcement. The vast majority of teachers, governors and parents have no idea that the goalposts have been moved. Journalists haven't noticed either, and even the Secretary of State for Education seems not to be aware of his own plan, totally failing to mention it during an hour-long press conference on Saturday 16th, where he continued to talk about the focus on Reception, Y1 and Y6.

Today (Friday 22nd) the Government is finally publishing the scientific evidence it was given before making the announcement about Reception, Y1 and Y6. Will it explain why the child of a nurse should go to school, but the child of a builder should not?

Whilst the Government continues to misrepresent the number of tests being carried out (e.g. including tests which were posted out but never returned, or counting a patient twice if their first test was unclear), many people are losing confidence in the Prime Minister and his team to say what's true, rather than what makes a good headline. The decision to stop contact tracing on March 12th took the UK in a different direction to countries like South Korea and Germany where death rates have been kept much lower. It wasn't until April 23rd that the Health Secretary announced plans to recruit 18,000 contact tracers. A month later, it still isn't clear when the contact-tracing will actually begin, or how effective the service (run by two private companies) will be.

Understandably, many parents and teachers are saying they don't feel it is safe to send children back to school on June 1st. If they are now to be told that that they have actually been planning for the wrong set of children, the sense of anger and mistrust is sure to grow.

The Education Secretary must publicly state which policy he supports; the one announced on TV by the Prime Minister on May 11th or the one uploaded to the Government website on May 14th.

If he supports the Prime Minister's May 11th policy, he should remove the contradictory statement from the Government website and make an apology for the confusion he has caused.

If he supports the May 14th policy, he should provide scientific and medical evidence to justify it, and explain why he has spent the past week promoting something different.