A fortnight ago I wrote about Boris Johnson’s failure to understand that in a Parliamentary democracy, a Prime Minister has to allow MPs to question his actions and his policies. Prime Minister’s Questions takes place every Wednesday, but in the eleven weeks since he took office, he has only attended once. This week, PMQs was cancelled again because of another suspension of Parliament.

At the Parliamentary Liaison Committee, the Prime Ministers faces ninety minutes of much tougher questioning from the chairs of Parliamentary Select Committees (experts in specialist areas such as health, environment and security). Crucially, if these senior MPs feel he hasn’t given a straight answer, they can challenge his response and ask for more detail, so there’s no room for blustering his way out of difficult questions like he does in the House of Commons. In August, Boris Johnson promised to meet the Liaison Committee in September. When he prorogued Parliament in September, he promised to meet them “at the earliest opportunity”. But despite making time for a “Facebook Question Time” and a “School Newspapers Question Time”, he now says that he’s too busy to meet the Liaison Committee until October 24th!

This disdain for scrutiny has clearly rubbed off on our local Conservative MP who has blocked many residents on social media. Many letters from constituents get no reply (or get a reply which fails to answer the question being asked) despite the MP having a staff budget of over £150,000 per year.

MPs should be accountable for their actions: The public have a wide range of views, so no MP can agree with all of them, but they should at least engage in a respectful conversation. I believe that MPs should hold public meetings on a regular basis, like the one I have arranged in Liskeard on Friday 25th October for local residents to question me and our Liberal Democrat MEP Caroline Voaden about our actions on Brexit, the Climate Emergency, the NHS, road safety and any other topic of interest.

When Government shows it is not listening to Parliament, and when MPs show that they are not listening to the public, it is inevitable that people will take to the streets to demonstrate their frustration. This week, Extinction Rebellion showed that millions of voters want bolder action to tackle the Climate Emergency. Next week, I will take part in the People’s Vote March to demand that the public get the final say on Brexit. Politicians who refuse to meet or debate with the public cannot credibly claim to “respect the will of the people”. 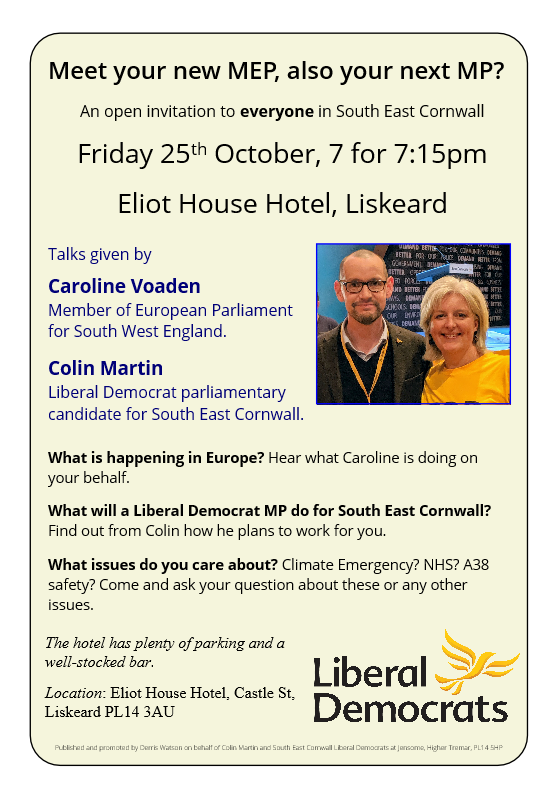